And so we come to the Sprint Relay. Or at least we would if we were just here for WOC. But of course we are here for the spectator races as well, so first it was a 30 minute drive out to the coast north of Riga. Pine-tree covered sand dunes with a range of contour detail from big hills to extremely vague knolls in vaguely vegetated marsh made for a really nice area to orienteer on, very similar to places like Culbin, Lossie or Pembrey. Next year's World Masters Long Race is the next forest north along the coast so should be good for those who make it.

Four reasonable family results in the bag and time to head back to Riga. A quick stop at the hotel for lunch and a shower and then a tram and a bus got us to the Latvian National Library for the "unofficial World Indoor Orienteering Championships". The library is an extremely impressive triangular shape on the west bank of the Daugava River. Orienteers had a free run of all 14 floors (12 numbered floors plus a basement and a Mezzanine.

It is difficult to describe quite how complicated the race turned out to be.  The first three controls were in the basement, and required navigating a room filled with tapes to make a maze. So far,so Ultrasprint. Leg 3 to 4 was then probably about 40 metres straight line. 30 minutes later I was getting close to finishing it. First you were faced with five closed doors , some or all of which might lead to the corridor you were looking for. James later described this as like Scooby-Doo, with people disappearing through one door only to reappear through another seconds later. Then it was simply a matter of working out which of the five or six sets of staircases linked up, and which bits of which floors were taped off. A quick visit to the fourth floor allowed me to get back down to the Mezzanine, only to find out the staircase I wanted was out of bounds. To be honest I wasn't entirely sure which other two floors the Mezzanine was between. Eventually it became apparent that the only way to get from control 3 in the basement to control 4 in the basement was to go all the way to the 12th floor in one staircase and then come down a variety of other staircases back to the basement. A quick slalom through the men's and women's changing rooms got you to another "which door do I need" problem, and I let out a cry of triumph as a control appeared in a dark corner of the room. You could tell this was a good library: next to the control were the plans for a hyper-space bypass. Or maybe I was just hallucinating by this stage.

So that was control 4, but my course had 16 controls. I eventually threw in the towel at control 6. James and Helen made it to 8. Some truly warped minds completed the course (including at least three separate visits to the 12th floor), but breaking an hour was an achievement. Apparently you were then meant to run a second course. But we needed to get to the Sprint Relay, so had an excuse to leave.

Sprint Relay: So near yet again

Sprint relay orienteering (according to Gary Lineker): the whole world runs round in circles for an hour before Sweden, Switzerland and Denmark share the medals between themselves.  And so it was again that Sweden triumphed and Maja Alm decided she would really like another medal so ran a bit faster than everyone else to make sure she got one. Mind you, Kris Jones quite fancied a medal as well, and ran even faster than everyone else on his lap, to give Peter Hodkinson 15 minutes of pain trying to stay in second place. But it wasn't to be, and the pack of NOR, CZE, GBR and RUS that went out fighting for the bronze medal on the last lap all missed out to the flying Dane. Megan eventually brought GBR into seventh place, but on another day who knows.

On the mapping of boulders

Yesterday we discovered that an artificial boulder is mapped as a statue at the World Championships Sprint Race. Today we present part two of the exam.

Prospective World Championships Mapper Exam Paper Sample Question Part 2
You are using an artificial boulder as a control site in the WOC Sprint Relay. What map symbol should you use to represent it?

Answer: The site is clearly a boulder. It is therefore mapped as a boulder.

And so the artificial boulder that was a statue at the Sprint Race appeared as a boulder at the Sprint Relay. I'm now waiting for it to appear as a man-made feature at the Middle race, in which case it will be a black cross or circle and have had three different symbols in three days.

The WOC 2018 write-up described the Sprint Relay area as " a particularly romantic part of Rīga". Those of us who made it out into the area might have a slightly less romantic opinion. To be honest I was surprised at how many old and run-down buildings were still standing that close to the centre of Riga. The police presence (policemen on motorbikes at key road junctions) came in handy though. As I set out to photograph the women half way round the first lap I came across a police van that had been summoned to remove a somewhat inebriated local who was showing slightly too much interest in the shiny red and white flag he had just found. 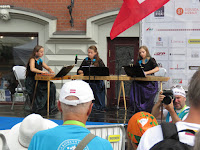 I didn't write about the opening ceremony yesterday, despite this being one of my favourite WOC topics. This was partly because I forgot, but partly because there really wasn't much of one. The layout of the arena was not ideal, with an awful lot of people packed in a very small and flat square. They marched some flags down the run-in, two people said a few words that even they will not be able to remember, and three women played traditional Latvian music on traditional Latvian instruments whilst dressed in traditional Latvian costumes. At least we were spared the traditional Latvian dancing, or at least I think we were, since I'd left before things finished.

On the mapping of bears

In a weird echo of the WOC 2017 Opening Ceremony we spent the next day looking round Riga and found two girls busking on cellos. They knew what the crowd wanted, and so for a second time I was treated to "Smells like Teen Spirit" by Nirvana played on the cello. What a missed opportunity for the Opening Ceremony.

They were sat in the middle of over two hundred painted bears. The bears had been yet another conundrum for the WOC mapper, and the answer is that a line of six foot tall bear statues constitutes a crossable fence.