OpenOrienteeringMap from Start to Finish 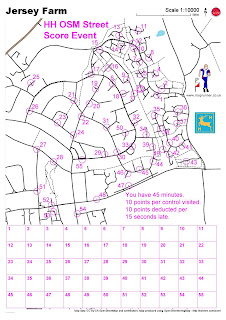 Fancy putting on an orienteering event anywhere in the world but don't have a map? Then you've never heard of OpenOrienteeringMap. This amazing concept allows you to generate an orienteering map of just about anywhere based on OpenStreetMap, which describes itself as "a free editable map of the whole world". What this means is that thousands of people have been out and mapped everything they can find to create an on-line map. This has the huge benefit that it is open data, licensed under a Creative Commons licence (CC-BY-SA). Subject to certain conditions it is therefore essentially free to use as source data for other maps.

Ollie O'Brien, the man behind YepSport and the mapper for the London City Race amongst other things, has developed OpenOrienteeringMap that now allows you to generate an orienteering map based on OSM. This has been used by SLOW for their monthly street-O events around London. Last night I put on a Street-O in St Albans as part of the HH Summer Series to find out what was involved in staging a race like this.

First step as ever was to select an area. The north-east corner of St Albans is an area known as Jersey Farm. This has some complex housing estates joined by a network of paths which seemed just about right for a Street-O. To make life easy I decided on a 45 minute score event. So let's see what an OOM map of Jersey Farm looks like.

1) Go to http://oobrien.com/oom/. The default view shows Docklands. You can enter a postcode to go directly to somewhere in the UK, or use the zoom facilities to move to wherever you want to use for your map.

2) The default values of the various options are OK to start with. You have a choice between "Street-O Map" or "Pseud-O Map". The Street-O map is black and white and only shows features such as roads, paths, railways, rivers and large buildings. The Pseud-O map attempts to reproduce a standard orienteering map using the ISOM map specification. To me this looks much nicer, but for a street event it really isn't needed, and it's simpler to stick with the black and white version.

3) Once you have moved to the area you need then you can generate the map. Click on the "Create a map" button. This brings up the Map Builder window. You can then select the paper size, map scale and map type. There is also a check box labelled "Include controls". If you leave this box checked then you can add start, finish and controls to the map when you generate it. For my event I wanted to use OCAD for the course planning so I cleared the check box. 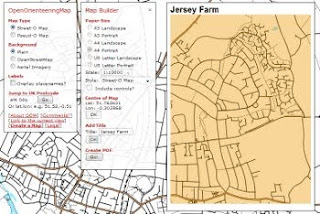 4) You then need to left click on the map to mark the centre of your map. This brings up a brown rectangle showing the exact size of your map. You can move this around as necessary by left clicking again, or by selecting a different scale, page size or orientation. For Jersey Farm I went for a 1:10,000 map. Once you have the correct area click OK, and then add a map title if needed, and click OK again.

5) You will now get the message "Creat PDF". Click the button labelled "Go!" and you will get your very own map in PDF format. This is named oom.pdf by default, so it is safest to rename it straight away and save it on your computer. You may well end up generating several versions of the map during the planning process so you need to make sure you are using the correct one. 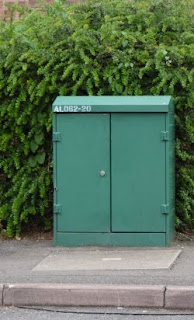 Now to plan the course. To make life easy you don't want to have to put out controls so you need to find some other way of proving people have visited the correct sites. SLOW use questions about something in the middle of the circle ("what is the name of the pub" and even "what sort of elephant is this" for example) . For me this is too complicated, since it makes life difficult for the planner to create the questions in the first place, and it is annoying as a competitor having to stop to write down long answers or hunt around for obscure answers. I therefore went for something simpler. Jersey Farm is covered in green telephone connection boxes, most of which have a nice painted number such as AL062 20. Getting runners to write down the last two digits seemed the best idea. A quick run around the area and I had found about 50 possible control sites. I still had a few parts of the map with no controls, but a quick hunt around on Google StreetView helped find a few more. It also raised hopes a few times when I spotted a fuzzy green shape in the distance only to find it was a green recycling bin. It turned out that runners at the event had exactly the same problem. The photos aren't quite good enough to read the labels so I had to do another run round to check them. In the end I went for 55 controls. This was probably a little over the top, but it does give runners something to think about. 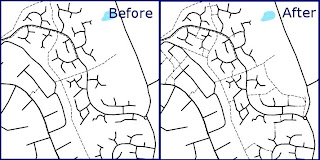 The event does of course rely on the quality of the OSM base map. In general it was pretty good, but whilst checking sites I did notice several things that needed changing or adding. The great thing about OSM is that you can always make the changes yourself. That isn't really what this is meant to be about, but for those who are interested I used JOSM to edit the map and add the odd extra road, several missing paths and some parks.

I wanted to use OCAD to generate the course. This won't accept PDF files as a background map so I first converted the PDF file to a JPG using GIMP. You can then use the standard OCAD course planning features. This allowed me to add the rules, a set of boxes for answers plus some extra logos. You can always use the built-in OOM function to add start, finish and controls if you don't have OCAD. 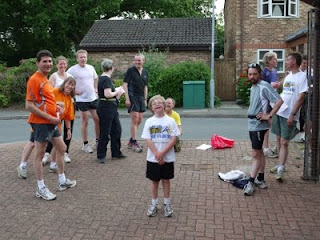 And so to the evening of the event. With no controls to put out it was simply a case of turning up at the start with a pen, clipboard and watch and setting people off. I put the start and finish at a green box so that people could see exactly what they were looking for before they started. Everybody got at least 19 controls, with the winner managing 42 in the 45 minutes available. You can see what routes some of the runners took on the HH RouteGadget site. The comments were all very positive, no doubt helped by the good weather and the interesting nature of the terrain. As ever there was much discussion about the map. The main issue was one I was already aware of from some of the SLOW events: open areas such as parks and fields do not show up. You can therefore end up staring at a large open space in front of you and wondering quite where you would come out if you ran across it, and whether you'll get stuck behind an uncrossable fence before you reach the road or path you want to be on. There's no easy answer to this, but it is generally fairly obvious once you get to the particular location. Using the full-colour Pseud-O map would help, and several people commented that they would prefer it.

Overall this event confirmed that it is perfectly possible to hold an event based on OOM. Jersey Farm itself turned out to be perfect, with surprisingly little traffic. Next time all I really need to do is move the start and finish and we could use pretty much the same set of controls. And then there's other bits of St Albans, and Mike said that Harpenden looks possible, and I've always wanted to do something in Hatfield, and then we could try Shenley or Welwyn or even bits of Watford. Looks like the Hertfordshire Street-O League may not be far away.
Posted by Simon at 6:56 am 1 comment: