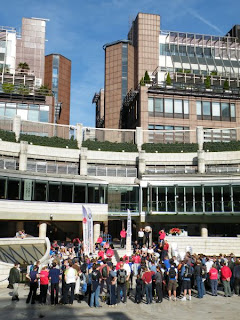 What an event. If you haven't seen it I recommend starting by looking at the map and courses in Routegadget and then seeing gg's video. Then there are the results plus lots of pictures, discussion and comments from officials on the official event web site.

The map, produced by Ollie O'Brien, is a pure work of art. There laid out in front of you is the whole City of London, from the remains of the Roman walls (in the olive green just north of control 135) to St Paul's Cathedral (control 151) to modern skyscrapers such as the Gherkin (control 137).

This was a chance to orienteer around the streets of London, which on its own would have made a great day out. The street network is not particularly complex, but it is good enough to make the navigation interesting, and around every corner you find a view of some well-known building to distract you. The start and finish were in Broadgate Arena next to Livepool Street Station (as shown in the photo of prizegiving on the left). The majority of the 400 competitors arrived by public transport and could sit in the warm sunshine while they waited to start or to discuss route choices after they had finished.

But the added element on top of all that was the final few controls spread around the Barbican Centre. The is spread over multiple levels, and proved a real challenge to map. Never before have so many people been so confused by so few controls.

It's also worth looking at Ollie's web site where he explains some of the technology behind the race.
Posted by Simon at 7:20 pm No comments: