Tomorrow's event at Chobham Common will mean that I have gone a whole year (and 55 events) since I last used pin punching. The graph shows how pin punching has almost died out at events I have run since I first used Emit at an event on 28th June 1995 in Norway. The only upward trend on the manual punching curve was in 2004 when I ran several of the Sydney Summer Series races which still use pencils to write on control cards! The start of the SI take-off was the Scottish 6-Day in 1999, after which most of Great Britain bought SI equipment. The apparent recent rise of Emit has two main causes. It is now used widely in the South Central, so that gives me five to ten races a year. It is also used at various overseas multi-day events I have been to, such as the WOC spectator races this year. My guess is that future years will see a fairly steady trend of SI above Emit, with the odd rare pin punching event.

Out of interest I've looked at when I last used pin punching at various types of event:
This weekend is also exactly 9 years since the first use of SI at a race in Great Britain. This was at the short race at Euromeeting 1997 held in the Lake District. I was one of those helping out behind the scenes and trying to work out what to do to make the system work, whilst the world's elite runners went through the same experience out in the forest. Everybody coped OK and the rest is history, as shown by the graph. For those desperate for more information I wrote a CompassSport article in 1999 that outlines the history of electronic punching in Great Britain.
Posted by Simon at 8:31 pm 1 comment: 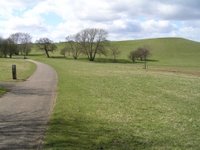 The new release of Catching Features has finally arrived. If you've never tried it then I suggest downloading the demo immediately, and then paying your money to buy the full version. It is a fantastic orienteering simulation, with a huge range of maps and courses to try out, plus a world-wide ranking system and on-line competitions. Don't miss downloading the World Championships maps and courses from Japan 2005, Sweden 2004 and Switzerland 2003.

The main feature of the new release provides a vastly improved map conversion utility. This takes in an OCAD map and spits out a virtual model of the map that you can then set your own courses on. People have managed to make some pretty impressive maps with the old editor, but it was hard work and took a long time. The new editor is simply amazing. I've had a quick play with some real OCAD maps and within just a few minutes you can produce very accurate conversions. As an example, the left-hand picture is a screen shot from a conversion of Campbell Park, as used for the British Sprint Championships this year. The right-hand picture is one of the photos I took whilst checking sites before the race. The main difference is the fence in the converted map, which hadn't been put up when I took the photo!

I'm sure we'll start to see even more conversions of world-class areas in the near future so you can spend the long dark nights practicing your O technique, just like Thierry does. It strikes me that we could be getting close to a new discipline: indoor orienteering. It doesn't look too difficult to connect Catching Features up to a treadmill, and then you could make the running speed in the game proportional to the speed of the treadmill. You could then have indoor orienteering races just like they have indoor rowing world championships on rowing machines. Just a thought.
Posted by Simon at 9:09 pm No comments: