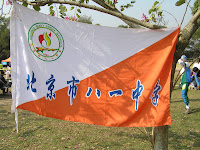 A little late perhaps, but here are a few thoughts about the Hong Kong Championships and Asia Pacific Orienteering Championships (APOC) held over the New Year in Hong Kong. For those of us who had orienteered in Hong Kong before it was pretty much as expected: hilly, rocky and with some very thick vegetation in places. We certainly got all of that, plus two good sprint areas (an ornamental city park and a holiday camp with complex buildings plus interesting rock features). Ten minutes a kilometre proved to be quite an achievement even for the elite, but the courses were suitably shortened to allow for this. In other countries you could run 2.7km as a sprint rather than a middle race and 5.9km as a middle rather than a long race, but these courses proved about right for M40L.

A few things caused minor problems on the technical side (especially the use of Emit for a timed start) but overall things were fine, with good maps and reasonable courses given the nature of the areas. There were a few other minor scares, with a British runner ending up being rescued by a fire engine after running off the map during the Hong Kong night championships, and two Japanese runners falling into deep unmapped pits during the APOC relay and requiring medical attention. Fighting through some of the thicker vegetation caused several people to lose their maps, as well as a pair of glasses in one case.

One thing that struck me was the very poor attendance from traditional APOC nations such as Australia, New Zealand, the United States and Canada. These four countries scraped together only a handful of entries, leaving the top five nations to be Hong Kong (450), China (114), Japan (67), Great Britain (29) and Kazakhstan (24). There were also APOC entries from Taipei, Korea, Macau, the Phillipines, Singapore and Russia plus the normal scattering of Scandinavians and other Europeans. The Brits claimed their fair share of medals in all of the events (including four for Helen), and probably ended up about level with the Kazakhstanis in the overall medal table.

The most noticeable thing to me was the presence of large numbers of Chinese juniors. The Chinese had a few reasonable results at M and W21, but practically no representation in the older age classes.The photo shows the flag from the Beijing Bayi High School, a club that walked off with several junior medals. Given the nature of the maps and courses it is clear that these are competent juniors and that orienteering now has a reasonable foothold in China. It will be interesting to see how long it takes China to overtake Japan as the strongest Far Eastern nation, and then how long they take to move on to challenge at the very top level of elite orienteering. From the results at APOC I would guess that this might be sooner than people in Europe might expect.
Posted by Simon at 10:10 pm No comments: