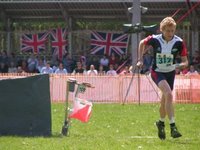 Who is the only British orienteer to have been British M or W21 Champion at Long, Middle, Sprint and Night distances and also won the JK?

This is the sort of question that fascinates some people (like me) but until recently would have been incredibly difficult to confirm. But a debate on Nopesport somehow ended up providing lots of interesting facts, and I found a few spare moments to put everything in one place. So now there is one place where you can find a list of winners for all major British orienteering events, (at least for M and W21). There's clearly a lot more that could be added, but I reckon this is a pretty good start.

And the answer to the original question is of course Heather Monro, seen in action at the World Cup at Battersea Park in May 2005. I'll make the questions harder next time.

And finally... As winter at last begins to appear in the south of England I'm off to sample the delights of Hong Kong at the Asia Pacific Orienteering Championships over Christmas. Look out for event reports in the near future.
Posted by Simon at 9:51 pm No comments:

Oxford City Race: The first of many?

Last Saturday nearly 300 orienteers experienced the delights of the Oxford City Race. In perfect weather we got a chance to run round all the tourist sights, scattering tourists as we went, and even managed to run through some of the colleges. As you can see, running under the Bridge of Sighs in Oxford is a bit drier than it would be if you tried it next week in Venice. The race demanded constant map reading and decision making, especially in working out how to get in and out of the colleges. There are a few more photos here.

Everybody who took part came back demanding more races like this, as you can see from the discussion on nopesport after the event. Oxford University Orienteering Club are going to be under great pressure to stage another such race, or even make it an annual event. Cambridge are likely to feel they have to do something similar. There is already an annual York City Race. People are beginning to see the attraction of sprint races in urban parks and university campuses. Perhaps Oxford will be the race that starts British orienteering off in a slightly new direction.

And finally... Whenever people start talking about annual events I always remember going to APOC 1990, based in Kamloops in Canada. After a race in the morning we went to the nearby town, which had decided to put on some suitable entertainment. This was advertised, in supremely optimistic fashion, as the "first annual Savonah Beach Festival". Many of us have often wondered if there was ever a second annual event.
Posted by Simon at 8:51 pm No comments:

There was an article in The Times today that looked at preparations for the equestrian events at the 2012 Olympics. These will be held in Greenwich Park, which is home to the Greenwich Royal Obervatory and also happens to have an orienteering map. It's not the most interesting park from an orienteering point of view, but it does have some contours and the views are truly spectacular.

The article discussed the planning for the cross-country stage of the three day event:

Benson, who rode competitively for 22 years, representing Great Britain in three European Championships, has established an outstanding reputation for fashioning courses and said that Greenwich is a “designer’s dream” because of the varied possibilities. “At this stage you have to have the imagination, thinking what you would have in a perfect world,” she said. “Then you have to be realistic.”
The complexity of laying out a cross-country course has meant that Benson has been appointed six years ahead of time. She can begin work on such ideas as whether it will be possible for the horses to go between the colonnades near Queen Anne’s house, or jump on and off the bandstand, and whether the Royal Parks will allow them to leap the hedges in the Rose Garden.
Paths will have to be covered, either by artificial or natural turf, and there is an existing pond for possible use as a water jump, one of the maximum of 45 jumping efforts that the horse has to make on the course of up to 6,270 metres. Always, Benson said, the horses’ benefit has to be a prime consideration. The hills must not be too steep for too long, the turns not too tight and obstacles must not be placed close to trees because the shadows could confuse the animals.
The comparison with the orienteering planning process struck me immediately. I then decided it would be interesting to see if we could run the Olympic three day event course as an orienteering race at some stage. And then I started thinking again about all the other opportunities that the Olympics will bring, even though there will clearly be no orienteering at the Games themselves. That doesn't stop us putting on events before and after to capitalise on the publicity and make use of some of the new facilities that will exist. Several of us in the South East have already been thinking about various ideas, but I'm not aware of any overall co-ordination yet. Maybe I need to suggest something to someone. Watch this space.
Posted by Simon at 7:33 pm 1 comment: