I've now managed to get all of the WOC relay results in to the Maprunner WOC Database. The individual runners from each team are still missing, but all the team results are there. There has been quite a lot of interest from around the world, so I'll keep adding things when I have time.

A few interesting things I spotted whilst getting the relay result queries to work:

- Great Britain had their worst-ever relay results for both Men and Women in Denmark 2006.

- No Swedish relay team has ever finished lower than 4th (discounting disqualifications in 1997 and 2001), and they have won 41 medals out of a possible 46: truly staggering. At least I assume the Swedish men were disqualified in 2001 in Finland, since they don't appear at all on the results list on the IOF web site.

- Five countries have won 128 relay medals between them. That's over 92% of the possible medals. Five further countries have won the remaining 10 medals.(Try naming these 10 countries before looking up the answer here.)
Posted by Simon at 10:24 pm 1 comment: 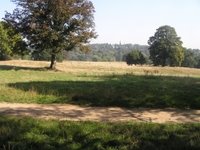 I controlled the London Orienteering Klubb event on Hampstead Heath yesterday. Hampstead is only four miles from central London, but offers fantastic terrain with open fields, heathland and even some reasonable areas of wooded contour features. The weather was great with bright sunshine during the day, even if there had been thick mist when the controls were being put out.

LOK used pre-marked maps printed on Pretex again, after a first test at Trent Park earlier this year. This seems to have overcome most of the problems of previous types of waterproof paper that have been tried for orienteering maps, and everybody I spoke to felt that it was worth trying to use it more widely.

Despite having mapped, planned and controlled on Hampstead Heath many times, yesterday was the first time that I had seen the exotic new population of ring-necked parakeets that have taken up residence around the lakes near Kenwood House. These bright green birds are unmistakeable, and even if you don't see one you will certainly hear them. My previous most exotic sighting on the Heath was probably the comedian and TV presenter Michael Palin who ran past when I was hanging controls for an event about 15 years ago.
Posted by Simon at 1:51 pm 1 comment:

The Power of World of O 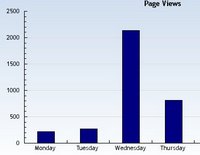 My website normally goes along averaging about 200 hits a day. So why did I suddenly get 10 times the traffic on Wednesday? Because Mike Eglinski wrote something in his OKansas blog that was reported on World of O and lots of people found it. The story goes back even further, because Mike wrote the article because I'd emailed him about something else that he'd written a few days before, that I had read because of his link from World of O. How many other sports have such a powerful gateway into all aspects of the sport from the very top (read all about Simone's trip to a Robbie Williams concert!) to the very bottom (power is now restored at the BOF office!).

I've had a quick look through some of the other statistics for Wednesday. The average orienteer is running Firefox on Windows XP. Internet Explorer was used for well under 50% of accesses, which I guess indicates that orienteers are quite sophisticated when it comes to the internet<.

It's noticeable that the most-read articles on World of O fall into two main camps: websites of the superstars, and anything written in English. I can struggle through Thierry's site in French, and get through various Swiss sites in German if assisted by Babelfish. I know a few key words in Swedish and Norwegian, and there's always the maps to look at. How long before you'll be able to get a translation from any language to any other language for any website? Stars who post in English are guaranteed a large audience, so thanks to people like Holger Hott Johansen, Oystein Kvaal Osterbro and Pasi Ikonen for letting us in on their secrets.

Today's thought that struck me whilst writing about something else: Everybody in orienteering knows who Simone, Thierry and Jamie are without needing any further information. Looks like you can add Hanny to the list.
Posted by Simon at 9:33 pm No comments:

Email ThisBlogThis!Share to TwitterShare to FacebookShare to Pinterest
Labels: World of O

Running to catch up

After a period of silence it's time to try to catch up. There have been all sorts of things I have been meaning to write about, but just never seemed to get round to. The moral is to do it little and often, rather than trying to write carefully crafted pieces as you would elsewhere. Let's see what you missed: