How difficult can it be to navigate round a shopping centre? Harder than you might imagine when it is Westfield overlooking the Olympic Park at Stratford, with four main levels plus three separate car parks each with nine floors. You can see a map extract on the left, and the full map is here. At one point I had to check the lift buttons to confirm that it wasn't possible to get to the Second floor of the shopping centre from where I was at the time. I least I didn't end up taking the lift between controls as many people did even if it is apparently quicker to go both up and down nine levels in a lift than it is to run the stairs. And just to put you off there was a view of the Olympic Stadium around every corner. I can confirm that the roof of Car Park A (that's level P9 if you are paying attention) should provide a great view of the Olympic Opening Ceremony. I wonder if they are selling tickets? 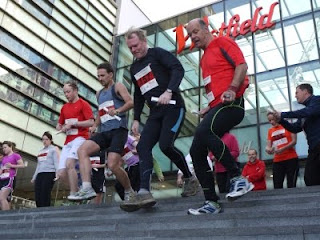 Meanwhile back at the orienteering, the event was the inspiration of Josh Jenner, who had negotiated access early on a Sunday morning, before the shops opened. The next master stroke was to convince Ollie O'Brien (the City of London Race mapper) to produce the map. Nearly 100 people took part, split over five mass starts at 15 minute intervals from 09.00 to 10.00. The start was headlong down the steps towards Stratford International Station, although some did turn straight round and head back indoors to avoid the cold wind. Control 101 was 10 m from the start horizontally, and an equal distance vertically. After that there was a chance to start working out how to join up all 28 controls on the 60m sprint to 102. I think it is safe to say that nobody will have come up with the same route.

I set out with the intention of simply doing a level at a time and working from the bottom to the top. This turned out to be a rather naive plan as it became apparent that getting between levels was not trivial. Stairs and elevators were helpfully marked with brown and blue arrows (brown for down to the earth, blue for up to the sky), but they weren't always where you wanted, and some were blocked off by building work. Just working out where the various bits of map joined together proved quite a challenge, not helped when you found out that level P4 in Car Park C was above Level P5 in Car Park A for instance. Controls were distributed across three terrain types: indoor shopping centre, outdoor ground level (including a trip to Stratford Underground and Bus Station) and car park roof level. You can see a few more photos here.

My GPS watch ended up showing 5.12km in 30.53, although it clearly struggled quite a lot with the indoor bits, and my route choice was far from ideal. Most people seem to agree that getting them all involved something around 5km, which for an area little more than 500m by 400m (by about 30m) is quite impressive. The results show that 39 people managed to get all the controls in the 45 minute time limit, plus quite a few who thought they had only to find they had missed one or two (or three or four...). James, Peter and Helen went round together and managed to get them all in 37:29 although this was apparently helped by having two maps so they could take it in turns to plan ahead and navigate.

A great day out, and one which will hopefully be repeated (and extended) later.
Posted by Simon at 8:38 pm