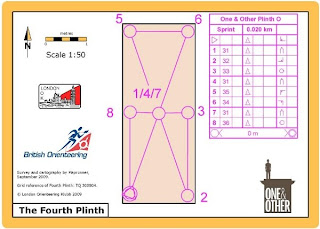 On Friday September 11th 2009 Adrian had his hour of fame on top of the 1.7m (wide) x 4.4m (long) x 8m (high) fourth plinth in Trafalgar Square as part of Antony Gormley's One&Other project. This provides a chance for 2400 people (one an hour for 100 days) to occupy the fourth plinth and do whatever they want. Brooner came up with the great publicity angle that this could be the world's smallest orienteering event. Around 20 other orienteers and even a few members of the public took the chance to run in the first orienteering event to be held in Trafalgar Square. 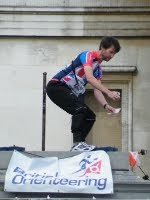 The whole thing was broadcast live on the internet, as indeed all 2400 hours of the project will be. Looking at the coverage afterwards it may have been a bit difficult to work out what was happening at the time, and even if you were there it wasn't immediately obvious. Adrian was so far above us that it was quite hard to communicate, especially over the noise of the fountains. The theory was that he would run a course on the plinth and then someone would run the equivalent course in the square. It soon became obvious that this was a bit difficult to synchronise so it turned into more of a straight relay. 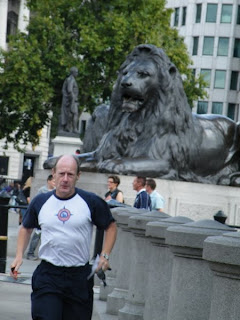 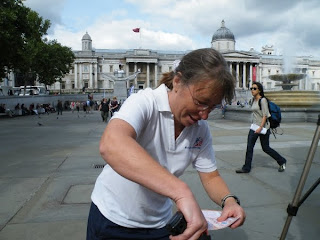 Discussions with Adrian before the event had concluded we had a chance of managing "ONE & OTHER PLINTH O" in the one hour available, but the unofficial target was to try to manage "ONE & OTHER PLINTH ORIENTEERING". As we came towards the end of the hour we had got to the T in orienteering, but Alan was desperate to finish off. The bright yellow cherry picker drove up to get Adrian down and replace him with the next plinther, but we relocated the start and finish a few metres and continued around it. I spotted that we could stop at "ORIENTEER" and that would still make sense, and even provide a better reference to the person who had started all this off in the first place. And so at just past 14.00 I set off on the final R, telling each control holder as I passed that we had finished. In total we had run 24 courses covering 8.56 kilometres in 52:47. 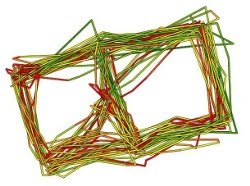 After the event it was simply a matter of downloading the GPS track and extracting the message. The good news was that we had a full trace from the whole race. The bad news was that my vague idea of doing something in Routegadget to extract the letters didn't really work. After some experimentation the final method turned out to involve quite a complicated process as follows:

1) Read GPS trace from Garmin Forerunner 205 using SportTracks and create a GPX file for each letter.

2) Import each GPX file into QuickRoute and use this to create a JPG image showing the letter. QuickRoute had the nice extra that allows the colour at any point to indicate how fast you are running. Thus green sections show bits where people were moving fast, whilst red is slow.

3) Use IrfanView to do a batch conversion of the JPG files. This provided an easy way to crop and resize all 24 letters without doing it painfully one at a time.

4) Create a 9 by 3 Word table and import the JPG letters into this for final printing.

And so as a contribution to the art created in association with this project we come to the final result, as shown below.

The start and finish are at the bottom left of each letter, and this means courses have to be planned so they don't go through this point. That explains why the E is backwards, the T is on its side and the L is upside down.

Considerably more involved that the orienteering class I took in grade school where we were sent out into the deep woods with a compass and a map.

The idea is very unique, at least to me, and makes for an interesting twist on the subject matter. Perhaps helping to attract a large interest in practices of orienteering